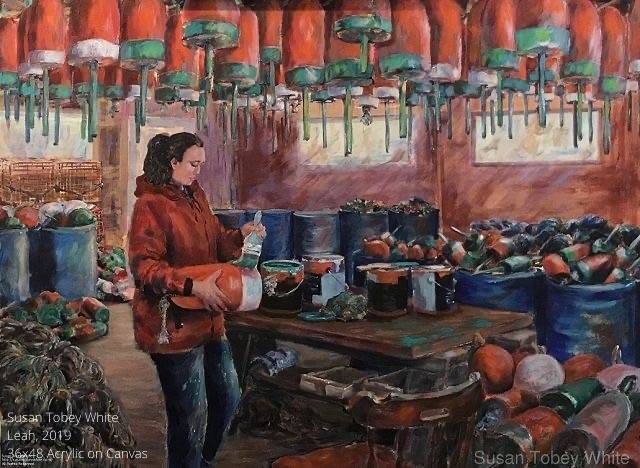 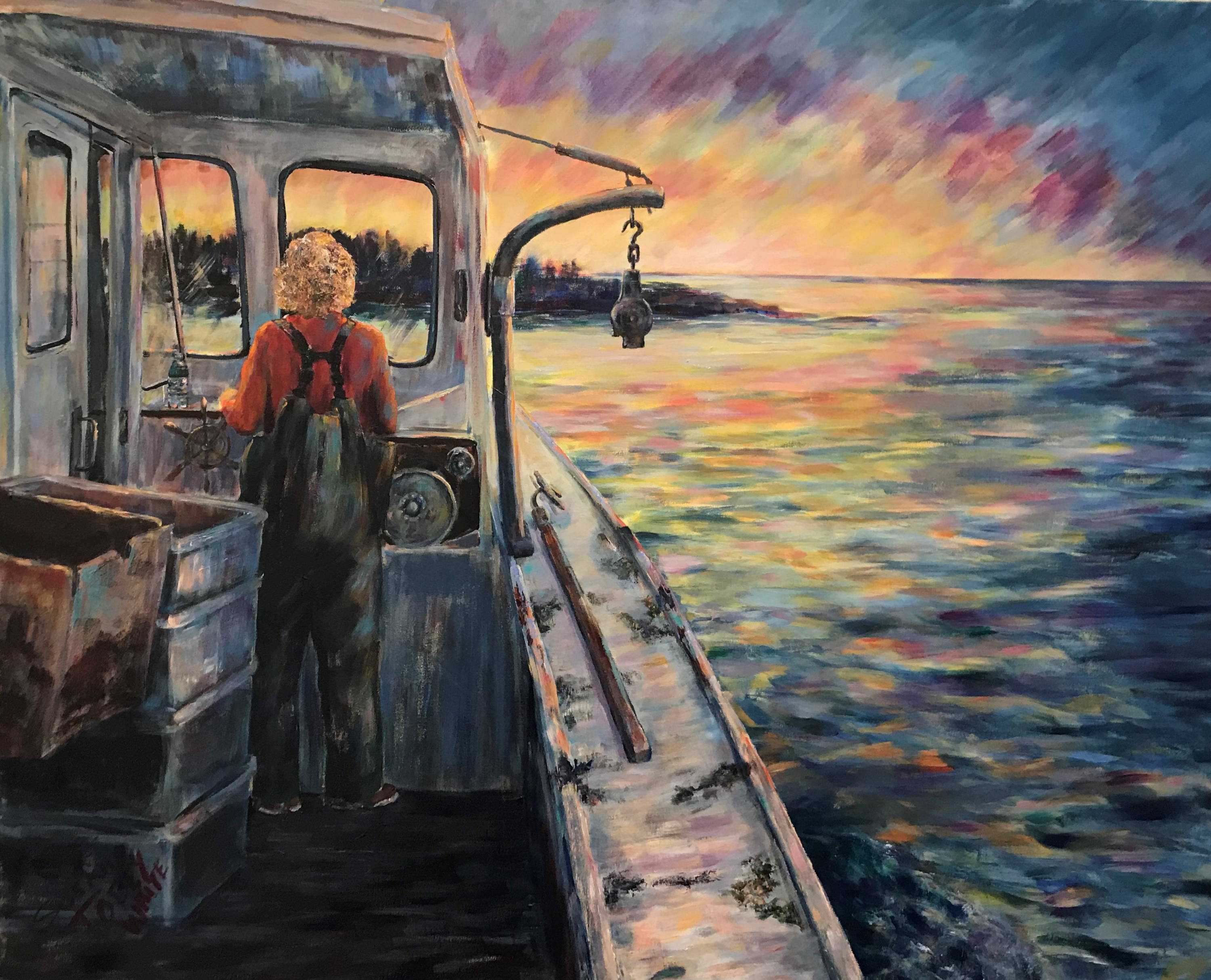 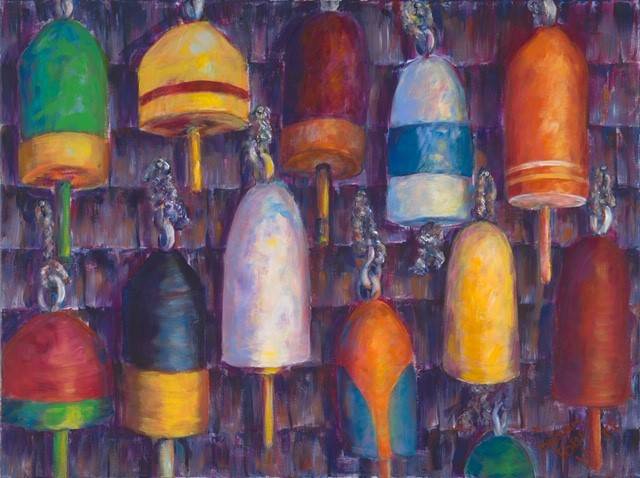 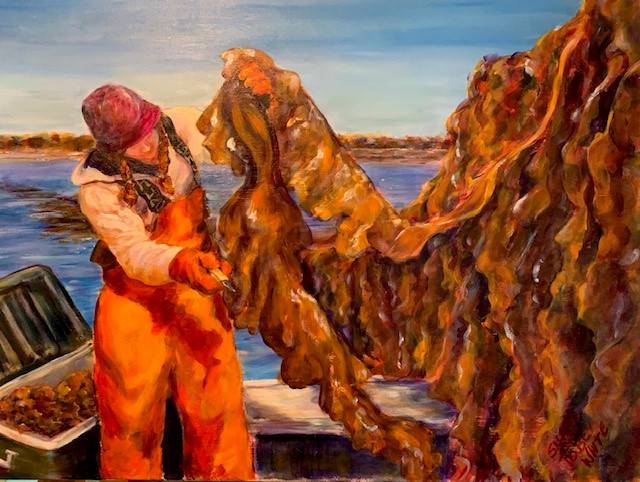 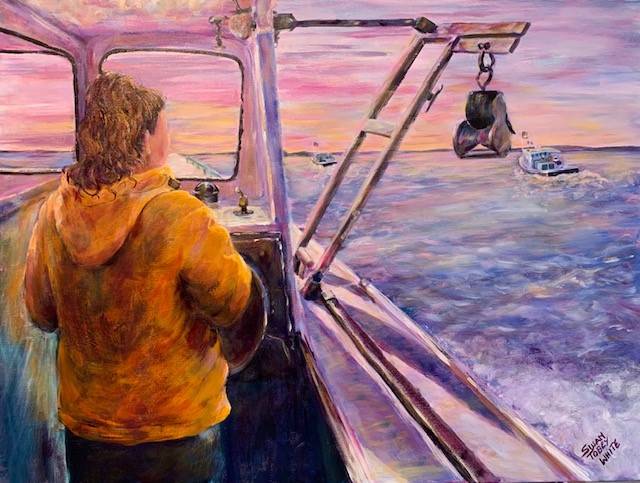 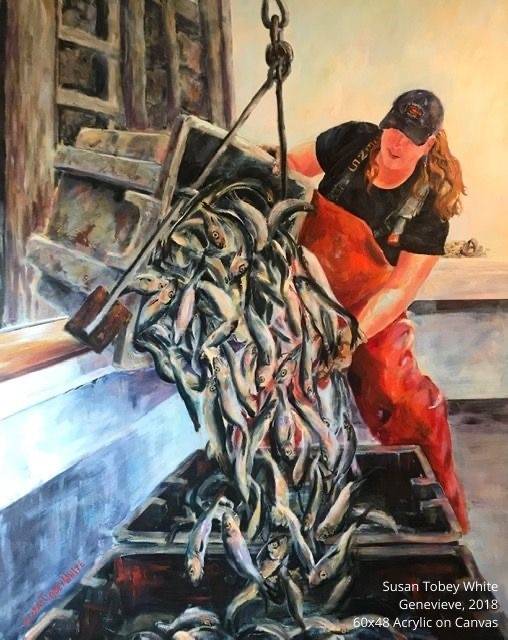 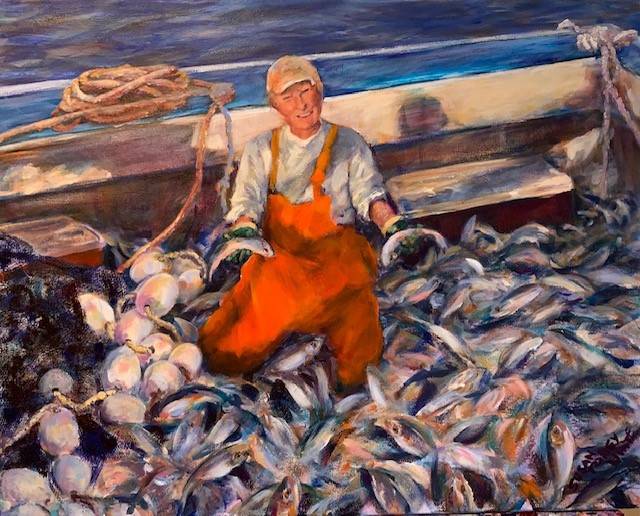 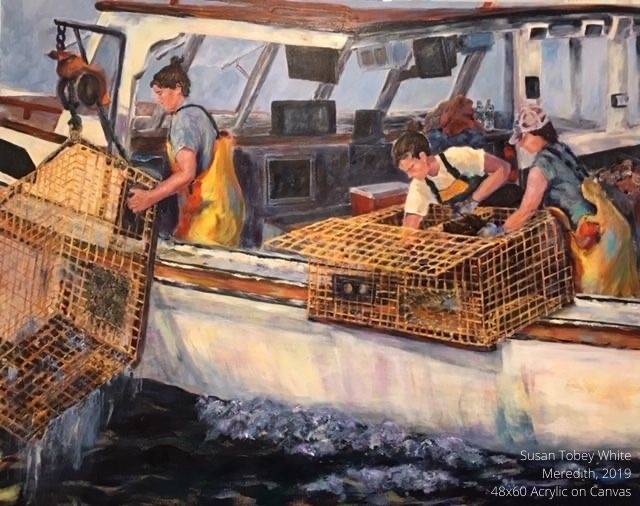 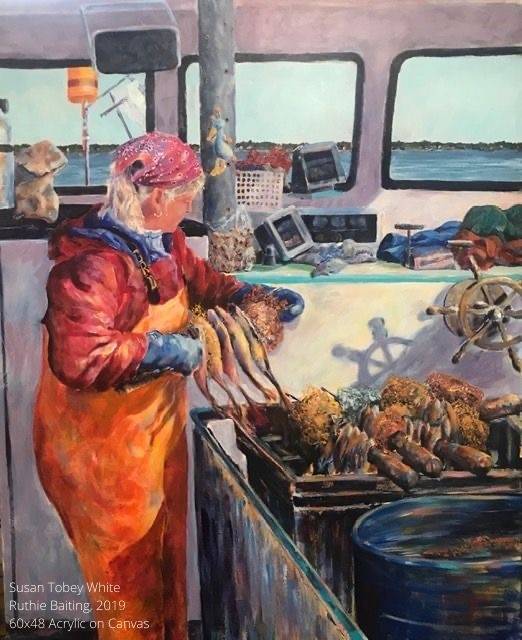 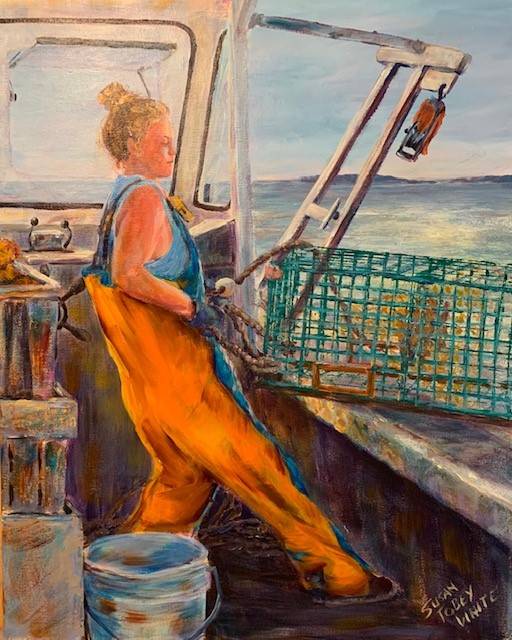 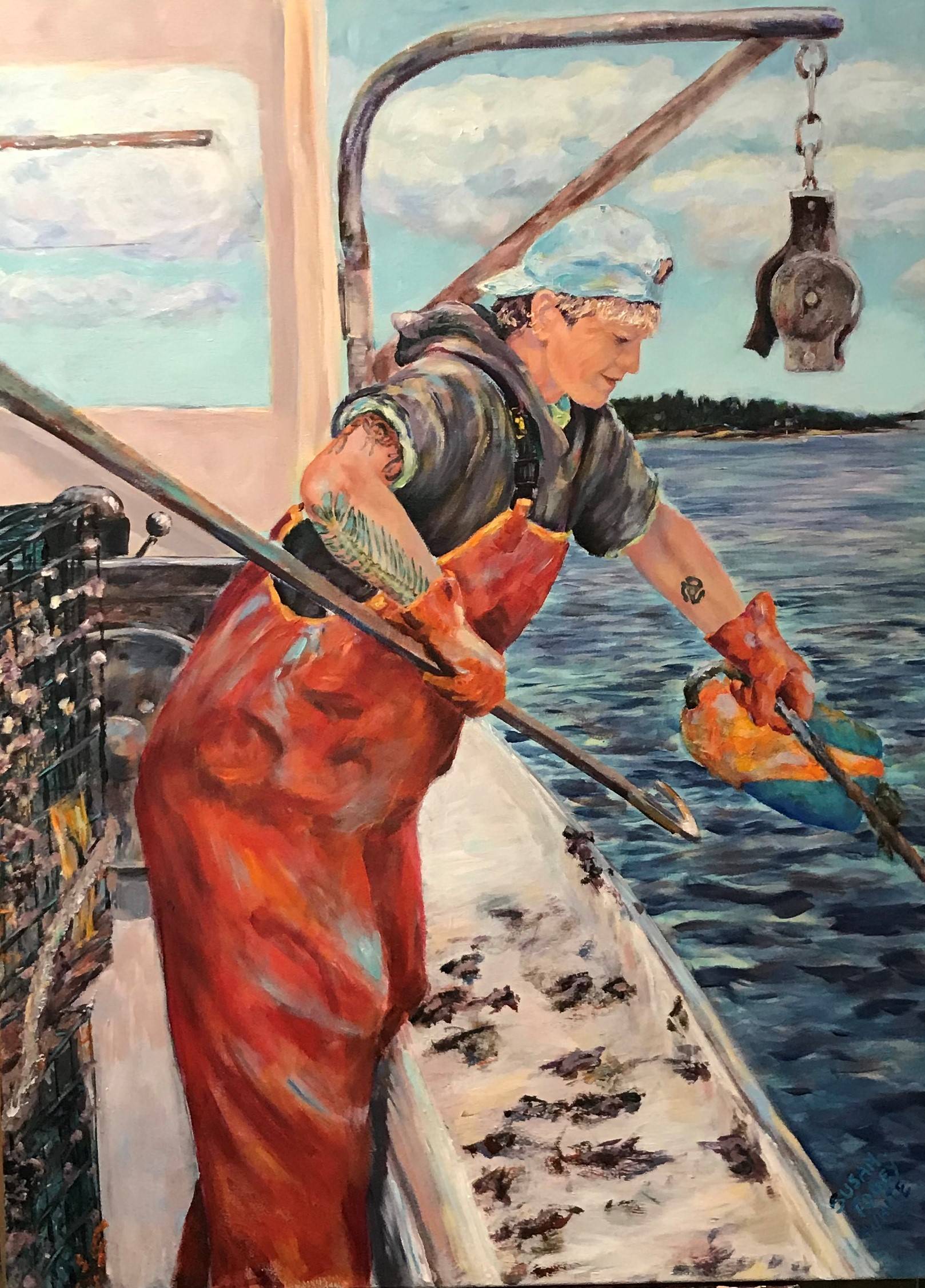 Archipelago is celebrating not only Maine's Bicentennial and its own 20th anniversary but Maine's working waterfronts with this show, 20 Miles. For centuries Maine’s working waterfronts have served as the critical connection between communities and the sea. They have helped craft this State’s sense of identity and reflect the bold and determined character of the men and women who work on the water each day. From ship-building to shipping and from aquaculture to lobstering, these iconic places scattered along our coast ignite in us a feeling that connects to something deeper; connects us to a way of life where one person, a boat, and a place to land it can craft a deep and sustaining connection for their community.

This show will be in the Archipelago Fine Arts Gallery from August 7 through September 27th. Gallery hours are Wednesday - Saturday 10 - 4. To preview some of the pieces, visit our Facebook Gallery.

This show features Susan Tobey White's collection of paintings and stories of women and girls who fish the Maine coast. In 2019 out of 4500 licensed commercial lobstermen 215 were women. Lobstering Women of Maine has a ‘Strength of Women’ interest, a lobstering education piece, traditions of Maine, family and heritage. The women are from the coast and islands of Maine from Wells to Corea Harbor.

My idea to create these paintings began with watching Suzanna unload traps onto a snow dusted dock on late November. I was amazed at her strength and how hard she was working taking on the full responsibility of a sternman. As a wife
of a part time commercial fisherman I am well aware of the work involved. I realized I have painted many men lobstering, but, never women. This simple thought developed into this whole series. A past student of mine now fishes out of Rockport. When she heard of the painting I had made of Susanna she led me to more women. As I learned the stories of these women I realized this is about much more than fishing. It has a strength of women interest, a lobstering education piece ( each
painting illustrates an aspect of lobstering), traditions of Maine, family and heritage. The women are from the coast and islands of Maine from Wells to Corea Harbor.

I feel honored to represent these women by creating their portraits and telling their stories.           ~Susan

For more information about Susan's series Lobstering Women of Maine, read this article from the Working Waterfront.

Born in 1985 on a working sheep farm in Montville, Maine, Abe Goodale grew up with a connection to the land, a curiosity of people and a passion for creativity. He studied ceramics and experiential education at university and spent the past dozen years working internationally as an artist and wilderness guide. He recently returned home to focus on a project closely connected to the local waters he grew up on.

As an artist, Abe seeks to capture his audience on an intimate level of reflection and sincerity. Through representational watercolors he creates paintings that both reflect and respect the individuals he encounters. Abe begins within the eyes of a person and gradually brings them to life while presenting not only a portrait but also an individual who tells a story and engages with the viewer in an authentic way. He demonstrates accurate representation of his subjects, while also allowing the medium to speak. Thus, his work joins methods of precision and control with the freedom of water and abstraction.

Following in the footsteps of his great-great-grandfather Charles Dana Gibson, Abe focuses on portraiture and the representation of an era. His deep passion for the arts and anthropology inspire him to look at the way humans engage with one another and the surrounding environment. He sees the arts as a platform to instigate change, to preserve culture, and provide visually enticing images that may document a way of living in an ever-changing world.

“I am passionate about painting outdoors. Witnessing the color, form and light of a place that is changing, in motion and musical allows me to move out of the lines. I see spots of color and shape, that when laid down next to each other represent the whole. There is an urgency when painting outdoors to lay down the paint boldly, before it all changes. Whether it is a grand landscape or a celebration of the everyday, my work is a response to being present. Time stops at these moments for me. When the painting works, you can enjoy the tracks of paint and share my point of view.”

Valerie Aponik has been painting for over 30 years. She lives with her husband , Paul (who designs and builds her frames) and dog, Ruby on Great Wass Island in Beals, Maine in the summer and in Phillips, Maine during the winter. After moving to Maine in 1976 to “live off the land”, she received her AD in Nursing and BS from the University of Maine in Farmington. A non-traditional student of art, she has studied with Colin Page, Stuart Shils, T Allen Lawson, Louise Bourne and Lois Griffel.

Laurel Averill grew up in Georgetown and Edgecomb, Maine. She holds a B.S. from the Evergreen State College in Olympia, WA where she studied Ecology and ceramics. She is currently a brushwork artist at Georgetown Pottery. Laurel resides in Edgecomb with her husband and two young children, Oliver and Azalea. 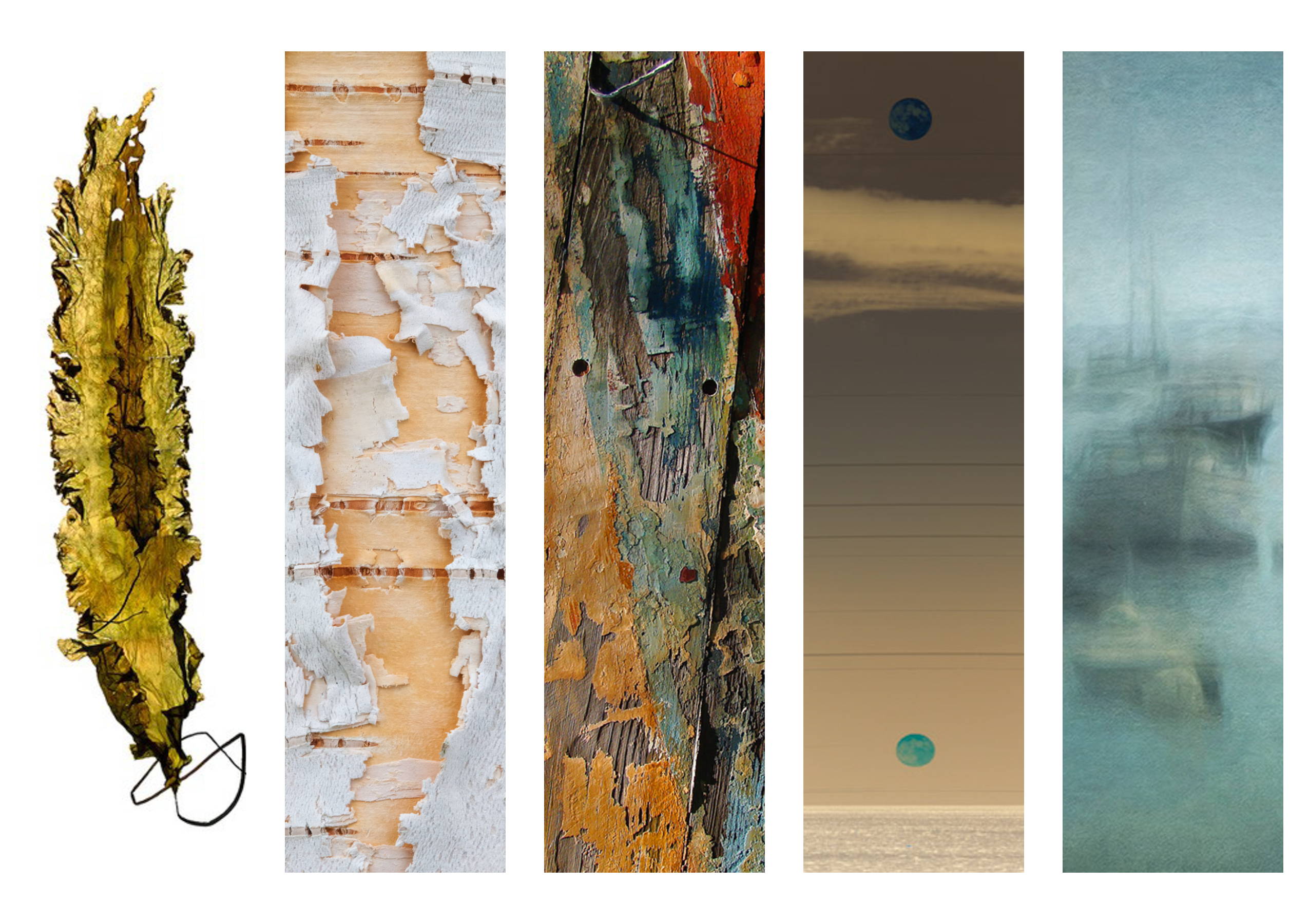 Our Maine features five fine art photographers celebrating Maine -- Josie Iselin, Jim Nickelson, Lisa Mossel Vietze, Olga Merrill and Terry Hire. This exhibit will remain in the gallery through Saturday, August 1, 2020 and online through December 31, 2020. To view the entire online gallery, click here: Our Maine, or click on the highlighted names above to see the online collection of each artist.

Terry Hire received his BFA in Art History and BA in history from the University of Tennessee.  Prior to moving to Maine in 1981, he lived in Nashville, TN where he was an interior designer, working on hospital design, store planning, and private home design. During that time, he fell in love with photography and took courses at the Maine Photographic Workshop in Rockport. He moved to Maine in 1981. His long-time interest in photography was put on hold during his work as an interior designer at WBRDC Architecture in Bangor until he opened his own firm, Design Alternatives, in Belfast.

For the last 15 years he seriously pursued photography, and his colorful images are in the hands of many private collectors. Terry Hire died unexpectedly on January 31, 2020.

Josie Iselin is a photographer, author and designer who lives in San Francisco but spends large chunks of her summers on Vinalhaven, where she shares a home with her brothers, her children and their cousins. 2020 might be the first year Josie has not spent time in Maine since 1969.

"Out my back door I take a long draught of the moist air amidst the burgeoning green of my early June yard; the ocean—just up over the hill—clings to the wind depositing clarity into the air around me. Out my front door the fog is shrouding the hill that dominates this little neighborhood, but the sun is playing with the fog and already glinting off the Bay beyond. Everything about this day breathes and smells of Maine.

But all of this sensory Maine-ness is here in San Francisco, where I live and work, where I have been in situ for months, waiting for release to travel and explore. The feel of stones in my hand and the curiosity to examine these stones, to put them on my scanner, to ask questions about why they are the way they are, is a process of looking closely that germinated on Maine beaches but is honed along my local shorelines overlooking the great Pacific Ocean. The visceral exuberance of pulling a massive sugar kelp from Penobscot Bay and holding it aloft to gasp at its golden, flouncingly sculptural splendor is at the core my work. How do I make these majestic organisms, the marine algae that are hidden from us under the tight lid of the tide, how do I make them come alive? First I have to get a specimen onto my scanner. (Both the sugar kelp and colander kelp were dried and shipped west through the US Postal Service.) Then I have to learn about its life history so that I can write its story." -- Josie Iselin

Olga Merrill is a visual artist primarily using the medium of photography. “It's incredible beauty everywhere“ she said to her Mainer husband during her first summer, 2013, in the USA. He surprised her with the camera at the end of 2015. Since then, her view of the world was made through lenses and thse world got another artist whose works are inspired by the beautiful Maine seacoast.

Some of Merrill's seascape images give the traditional sense of pictorialist graininess, and an almost meditatively slow feel of a mysterious, painted picture. The fascinating pattern of ice images pursues the exploration of emotion, providing more opportunity for an imaginative response from the viewer. All Olga's abstract works create space in the minds of those who allow themselves to become absorbed in a dreamlike world.

She says “I feel happy in fairy tale Maine and I invite everybody to see how Maine reflects my vision, dreams and feelings."

Lisa Mossel Vietze: "I moved to Maine after college and Maine is where I found my personal and artistic voice. I picked up a camera in the mid 1990s with the intention of making large landscape images full of drama and space with grand, far-off vistas in which I could hope to escape from childhood misery.

​But what my images came to reveal is the power and intimacy of smaller landscapes. I was increasingly drawn to forms, vitality, and the vibrations of color. I found my camera diving more and more into the world of macro photography, particularly the botanical world. I stopped chasing the horizon and began to search my own backyard. I explore the coasts, woods, fields, and gardens of Maine seeking to discover what is beautiful on any given day.

My search for beauty in my surroundings is much like my own search for the Divine. The color and vitality of flowers is like a salve for me. I make these images to heal and draw me deeper into my own living. Flora is not only delicate, flora is resilient. Plants exist despite poor environment, and even bloom. For me, flora reminds me of what exists within myself and has since the beginning – resilience, power, and beauty."

Jim Nickelson: "My work that is included in Our Maine is inspired by the wonderful views of the night sky and the full moon that are such an integral part to Maine's natural treasures. All of this work includes photographs of stars taken from Maine's night sky. The rising or setting of the full moon over the Maine landscape or ocean has been a significant part of my photographic practice for a decade now, and I've incorporated these photographs as well into my "Pale Fire" project. I hope that my interpretation of the Cosmos as seen from Maine resonates with viewers and perhaps even compels them to take another look upwards themselves."

Located at 386 Main Street in Rockland, the Archipelago Fine Arts Gallery features artists who work with natural, coastal, and working waterfront themes inspired by living and creating art in Maine. Our hours are currently Wednesday - Saturday 10 - 4.